The humble Lungi came into national reckoning with the song Lungi Dance, which lead even the most uber and suave urban dude to vouch for Lungi as a style statement. However this was not the first foray of Lungi into Bollywood. The Lungi Ā made its debut in the silent movie era itself. However the top heroes in Bollywood shied away from the Lungi until Amitabh Bachchan bucked the trend and gave a number of hits clad in a Lungi. Since then the top stars ofĀ Hindi cinemaĀ have seamlessly replaced their Armani suits for theĀ Lungi to get the common man look. It is to the credit of the Lungi thatĀ it has seldom failed at the box office. Lets take a journey of the five iconic Lungi statements in Hindi cinema. Mithunda in Krishnan Iyer MA breaks the class barrier by taking the Lungi from the local toddy shop to the dance floor of a five star hotel. His dance in the film to the song ‘Hum Lungi Uthati, Tumko Disco DikhatiāĀ challenges the class barrier. Mithun in the film also goes on to deliver the famous dialogue, ” Hum Lungi Uthati, Dekho Kya Kya Girati”, and beats up a bunch of goons. It isĀ amazing Ā that despite Mithunda executing complex dance moves or beating up a bunch of hardened criminals, the Lungi Ā remains Ā securely entrenched around hisĀ waist and successfully Ā protecting the superstarās modesty.

Mithunda portrays a Tamilian character in the film. Tamilians generally wear white lungi with a half sleeve shirt. In a departure to this , Mithunda in most part of the film wears block printed Batik Lungis with pista color as a base and block prints of orange and indigo whichĀ gives a perfect contrast. These kind of Lungis are popular in Bengal, and Mithunda who hails from Bengal, amalgamates the Bengali Lungi with Tamilian mannerism to perfection.

Manoj Bajpayee in Gangs of Wayssepur Wearing a Lungi while professing love for a girl was not highly recommended till Manoj Bajpayee rewrote the rule book in the film Gangs of Wayessepur. Ā In Hindi cinema theĀ hero generallyĀ prefers Ā contemporary urban clothes. There is a risk that the Ā Lungi approach might lead Ā the girl to pronounce the hero as uncouth or a tapori (ruffian). As a significant departure, Manoj Bajpayee is seen flirting with Reema Sen in the movie Gangs of Wasseypur wearing a Lungi and goes on to prove thatĀ Lungi if worn with elan can be a passport to a girlās heart. Lungi gives a sense of rawness as well is a pointer to simplicity which many women find attractive.

In the film Manoj Bajpayee wears a lungi with blue base and pista color check and perfectly succeeds in portraying a desi look. This desi look has brought new patrons for Lungi amongst the fashion conscious. Amitabh Bachchan in blue lungi with black and white stripes

Amitabh Bachchan, is seen in a Lungi in the film Saudagar where he portrays a person from the Muslim community. The trademark blue lungi with medium checks accessorized with a gamcha and topi puts him right into the heart of the character of a poor Jaggery trader. Big B gave an authentic look to his characterĀ in thisĀ 1970s film.

Amitabh again did a favour to the Lungi when he wooed Hema Malini while wearing a Lungi for the song ‘Khatoon ki khidmat mein salaam apan kaā in the film Desh Premee. The song was a homage to Mehmood, the Lungi man of Indian cinema.

It is to the credit of Amitabh Bachchan that Lungi became popular in Hindi cinema.

Mehmood never shied from wearing the Lungi and can be called the quintessential Lungi man of Hindi films. His ‘ Lungi uthake ‘ jokes are legendary in Hindi cinema. InĀ the movie Gumnam, MehmoodĀ plays the role of a butler. He wearsĀ Ā a violet Lungi with brown and white rings in the film.Ā In the song āHum Kale Hai to Kya Huaā, he does Disco and Kathak steps effortlessly while attired in a Lungi and matches the Ā moves of the dancer Helen. 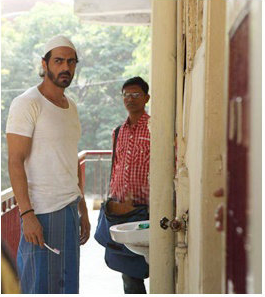 Arjun is generally seen in trendyĀ jackets and stylish outfits. He tones down his style statement in the Nikhil Advani film D-day where he wears aĀ Ā Patta Lungi with stripe of blue and gray color and a white vest. He plays the role of an Ā Indian intelligence operative in the film. Arjun goes to Pakistan incognito and to avoid detectionĀ  wears theĀ Lungi. Ā He pulls off this attire with verveĀ and helps perch Lungi high up in the style department.Ā

Next time you wear the Lungi remember you are in illustrious company and that you are making a contemporary style statement. A style statement which entire India identifies with.