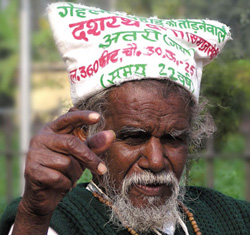 Specializing in the Impossible: Dashrath Majhi chiseled this path through the hill over 22 years Ā single-handedly. Pricing open a gap through the hill and making of the pathway stands as a testimony to the indefatigable human spirit of challenging the seemingly impossible. This pathway has now been paved by the government and named after Dashrath Majhi. Photo Courtesy: IBN

You all would remember the dialogue in the Amir Khan starrer Raang de Basanti, when Flight LtĀ Rathore tells his friends, that it is not enough to just be an onlooker and criticize the country. What is required is to take up the challenge and to make a change. In a now famous dialogue from the film, Lt Rathore says ā Dur se commentary dena bahut asaan hota hai, dusro ko galiyaan dena aur bhi asaan, Agar tumhey itna problem hai toh tum badlo na is desh ko, yeh tumhara bhi desh hai. Lekin tum nahi karogey, jaantey ho kyu. Kyunki ghar ki safaai mein haat gaandey kaun kareyĀ (It is easy to comment on the state of the country, if you have a problem then why donot you come forward and change things.This is your country too. But you will not do so, because who wishes to dirty in the cleaning of the house [country]).

One man did dirty his hands and his story is a celebration of human perseverance and commitment to a cause. Meet Dashrath Majhi , who carved out a road through a mountain, singlehandedly. Starting in 1960, then aged 26, he worked with a hammer , chisel and nails for 22 long years, cutting a solid mass of rocky hill and carving out a passage 360 feet long and 30 feet wide. He completed this feat in 1982.

Dashrath (1934-2007) was born in a socially and economically marginalized Mushair community in Gehlor village in Gaya district of Bihar and lived his whole life there.

The story starts one afternoon in 1960, when the thirsty Dashrath waited in the fields for his wife to bring Ā him water to drink. This apparently mundane task was herculean in Gahlor. Dashrathās wife, Phalguni Devi, would have to climb a hill to reach the fields where Dasrath wasĀ a daily wage labourer. That afternoon his wife was taking unusually long time. The worried and a wee bit irritated Dashrath waited. After a rather tenuous wait he saw his wife limping down the hill in obvious pain and minus the earthen water pitcher. She had slipped and fallen on the rocky surface of the hill and in that process the pitcher had broken too.

Dashrathās pride was hurt. Will his wife have to suffer like this her whole life he thought. Other scenes also flashed- the sick and the old could not climb up the hill to go to the nearest town of Wazirpur which by the circuitous road circumventing the hills was a 75 kms detour. AcrossĀ the hill the distance was barely 1Ā kilometer.

At that moment Dashrath has a choice, a choice that many before him had exercised, which was toĀ accept fate and hope someday government will take notice. This was however was unlikely to happen for Gehlor did not have the strength inĀ numbers, economics or the right social strata to make any impression with the political class or the beauracracy.

That fateful afternoon, Dashrath took a brave and Ā seemingly foolhardy decision. HeĀ would chisel a whole hill and forge a road. To him this was the only way though time taking, it was Ā better than living on false assurances which the State makes. Dashrath had taken the less trodden path- an echo of the Robert Frost poem- the road lessĀ taken could be heard.

Thus started the 22 years of perseverance and hard work, a single man with hisĀ chisel and hammer could be seen working at breaking the spirit and body of the hill. Ā Villagers lookedĀ on amused, terming him as a madman.

Dashrath was a man of meagre means. He would work for a living mostly as a daily labourer in the fields of the landlord or at stone mining sites. After work and during holidays chisling thrĀ hill was his obsession. He even moved his hut near to the hill, so whenever he would get time he could get atĀ carving the pathway. He was doing this not for personal gain but for the villageĀ - unpaid, unheralded and unrecognized.

His task sounded so preposterous that no one came to help. For twenty two long years DashrathĀ Majhi continued to chisel away. Ā During this course Ā India had seven prime ministers, Indian crafts reached space, India pulled of the green revolution and many more. Not much however touchedĀ Dashrath and Gehlor.

As years rolled and Dashrath chiseled, slowly the hill began to yield, a path was discernible, the task appeared doable and some like minded people extended help. UnknownĀ to Dashrath, he was actually living the famous saying of Vivekanda āIf the mind is intensely eager, everything can be accomplishedāmountains can be crumbled into atomsā.

Dashrath Majhiās road has been now been paved by the government and named after Dashrath Majhi. Photo Courtesy IBN

By 1982, the path was ready; a manās persistence had paid off. The 75 kms detour had been reduced to 1 km. Today one can see streams of people using the way- women on their way to collect fuel wood, motor bikers, cyclists and other villagers on their daily errands, patients being moved to hospital. Amongst them walking tall is the spirit of Ā Dashrath Majhi. Ā Dashrath became aĀ folk hero and a temple in the village bears his name.

It is surprising that for a long time such a feat remained unreported. ArunĀ Singh, a journalist, first discovered Majhi and brought his work to the limelight, the stunnedĀ nation took note. The Bihar Chief Minister,Nitish Kumar Ā when he met Dashrath Majhi was so overwhelmed that he stood up and asked Dashrath to take the CM chair. A 5 acre land was promised to him, which Dashrath requested to be earmark for a hospital. This came from a man who couldĀ hardly make his two ends meet. When Dashrath died in 17 August, 2007, he was given a state funeral. After the death of Dashrath, the government named his road as Dashrath Majhi Road andĀ his hamlet as Dashrath Nagar.

Inspired by Dashrath, Ramchandra Das, 62, of Kewati village (Gaya district) in 1993 decided to prise open the Kewatia hills to provide a road to his mountain locked village. Initially he requested Majhi for help, Majhi replied Ā ākaat kar dekhoge, toh ye pahad bhi kat jayegaā (if you go on cutting, this mountain too would give way). Ā Majhiās prophesy has come true., Ramchandra known as Pagla Baba single handed took fourteen years to make a 15-foot wide andĀ 30 feet long road. Ramchandra had only one lone visitor to his worksite and that was Dashrath Majhi, who would encourage Ramchandra and give him tips on how to cut through.Ā Today farmers of Kewatia village do not have to take a 5 km detour to their fields, thanks to Ramchandra. The Majhi syndrome had worked again.

Internationally there have been such single handed efforts of perseverance by men who share the same mental grit and determination as Majhi.Ā In 1906 William Burro Schmidt started boring a half a mile tunnel in Kern County, California dug entirely by hand, constructed over a 32-year period. Schmidt was a gold prospector; this tunnelĀ was a direct route to take his ore to the smelter and he did not want others to know thatĀ a gold vein was located through the tunnel.

In another similar effort, but with a different motivation is the story of Liu. Then 19 Liu fell in love with 29 year old widow Xu. Given the restrictions in the Chinese society toĀ such a marriage, the couple Ā ran away to the jungles and started living in a cave in Jiangjin County in Southern ChongQing area. Explorers in 2001 found a flight of 6000 manmade steps along the mountain slope. Liu had carved these steps single handed over fifty years so that his wife could traverse the steep slopes with ease.

Dashrath Majhi and the likes of him showed that with perseverance Ā nothing is impossible dream.

Will it not be apt if school administrators across the country make Majhiās story aĀ Ā part of the curriculum for middle school students. Let him inspire the children, Ā for this country needs people who specialise in the impossible.